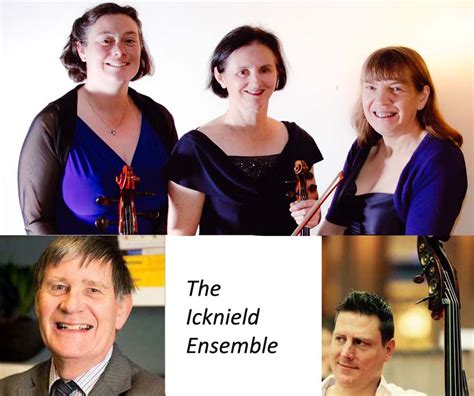 Anna, who has delighted Trunch audiences on many occasions, returns with her Icknield Ensemble, to perform Schubert’s irresistible Trout Quintet and other masterpieces for strings and piano by Brahms and the expressive English 20th Century Romantic, John Ireland.

Brahms’ Opus 60 Piano Quartet is one of the great Romantic masterpieces. It was written in 1875 at the height of the emotional dilemma caused by Brahms’ close friendships with Robert and Clara Schumann. Robert had been consigned to the lunatic asylum and Brahms’ relationship with Clara was becoming increasingly imbued with passion. It was a time of great moral searching for Brahms. Brahms revealed that the piece was a direct reference to Werther, Goethe’s Romantic hero of unrequited love, who eventually commits suicide. To his publisher he wrote, “On the cover you must have a picture, namely a head with a pistol to it. Now you can form some conception of the music! I’ll send you my photograph for the purpose.” Referring overtly to Goethe’s protagonist by describing the self-same clothes as Werther, Brahms continues, “Since you seem to like colour printing, you can use blue coat, yellow breeches, and top-boots.”

John Ireland, a student of Stanford at the Royal College of Music, is most famed for his songs and his piano music. However, he wrote much fine chamber music, winning the significant Cobbett prize for chamber music in 1908. His Phantasie for Piano Trio of 1906, makes deliberate allusions to the musical forms of Shakespeare’s time, yet is a lovely piece of late romantic trio writing.

Schubert’s Trout Quintet, written in 1819, needs little introduction. It is one of the most popular and appealing pieces of chamber music ever written. It gains its name from the song ‘Die Forelle’ (The Trout), written by Schubert a few years earlier, which is used as the theme for six wonderful variations in the fourth of the work’s five contrasting movements.

Anna Le Hair (website click here) is a pianist and piano teacher based in Tring, Hertfordshire. Anna gained an honours degree in music at Edinburgh University where she studied piano with Colin Kingsley, and harmony with Kenneth Leighton. Her postgraduate studies were at the Royal College of Music, London, where her professors included Peter Element and Hubert Dawkes.
Since then, Anna has enjoyed a busy and varied career as a performer, teacher, accompanist, adjudicator, conductor and ABRSM examiner. She gives regular performances both as a soloist and with her regular duo partners, and also as a chamber musician, playing in many venues in Britain and abroad. Anna has performed at many festivals in Britain, most recently in Kings Lynn, and including the Edinburgh Fringe and Buxton, where she was nominated for the title of ‘Performer of the Fringe’. She has also recently played at festivals in Spain and Croatia. In February 2014, she gave a recital tour in New Zealand with her duo partner, the violinist Arwen Newband. The Icknield Trio (Anna, Arwen and Sarah) opened the Piano Trio Society’s Festival in Notting Hill last year, and are performing this summer in the St Lawrence Jewry summer Festival in the City of London.

Arwen Newband (website click here) started to learn the violin at the age of 6. A New Zealander, she attended Auckland University where she studied with Mary O’Brien. She freelanced with the Auckland Philharmonia before gaining a scholarship which enabled her to study with Emanuel Hurwitz in London. She then embarked on a career which has included freelancing with various English orchestras as well as performing as a soloist and chamber musician. She has performed concertos by Beethoven, Brahms, Dvorak, Khachaturian, Mozart, Bach and Vivaldi and has given many chamber music concerts, recently forming a duo with pianist Anna Le Hair, with whom she has recently returned from a Recital tour of New Zealand. She is also a committed teacher, enjoying bringing the challenges of music to children (and adults) of all ages and abilities.

Nicholas Turner (Viola) started playing the violin at the age of 8 before transferring to the Viola at the age of 16. Whilst reading Law at University College London, he was Principal Viola in the Nottinghamshire County Youth Orchestra and University of London Orchestra. He has been Principal Viola of the Forest Philharmonic Orchestra, St Albans’ Amadeus Chamber Orchestra, and a member of the Bisolotti Players. He is a member of the Icknield Ensemble and has played at many of the major London halls and has given chamber music recitals throughout London, the home counties and farther afield. On separate occasions he has given chamber music recitals at private functions before H.M. The Queen, the Prime Minister and the Archbishop of Canterbury. He is also a Solicitor. He plays on a viola made to the Guarneri model in 1999 by the contemporary maker Paul Harrild, of Newark.

Robin Major is originally from the North of England and spent his formative years in the Manchester area.

Robin began his musical education as a violinist and became the leader of the Rochdale Youth Orchestra before being seduced by the deeper tones of the double bass aged 10. He was lucky enough to gain a place at Chetham’s School of Music where he spent 6 happy years, and was taught by virtuoso double bass professor Duncan McTier at the Royal Northern College of

Robin also spent 6 years as a member of the National Youth Orchestra of Great Britain and became the principal of the double bass section in both the main orchestra and the smaller National Youth Chamber Orchestra.

Robin’s playing career has taken him to some of the world’s most famous performance venues, including numerous appearances at the Royal Albert Hall in London, The Royal Concertgebouw in Amsterdam and The Schauspielhaus (now Konzerthaus) in what used to be East Berlin. He has also played under some of the world’s greatest conductors, including Vernon Handley, Mark Elder, Pierre Boulez, Colin Davis, Charles Groves and Matthias Bammert, and performed alongside such inspiring musicians as Jessye Norman, Yuri Bashmet and Gwyneth Jones. In 1990 Robin performed a concert of film music by Michel Legrand, conducted by the composer, alongside Sasha Distel, Vince Hill, and Jane Lapotaire at the Buxton Festival. He was a freelance classical and jazz musician in the North of England before moving to Germany in 1995.

Robin now lives in London where he is the principal double bass of the Corinthian Orchestra, and has made regular appearances with the Kensington Symphony Orchestra, Haydn Chamber Orchestra and Blaze Ensemble. He juggles his musical commitments with a career in software, which takes him all over Europe on a regular basis.

Robin is delighted to be playing at the Trunch Festival this year, and is looking forward to performing his favourite piece of chamber music in the double bass repertoire with the wonderful Icknield Ensemble.