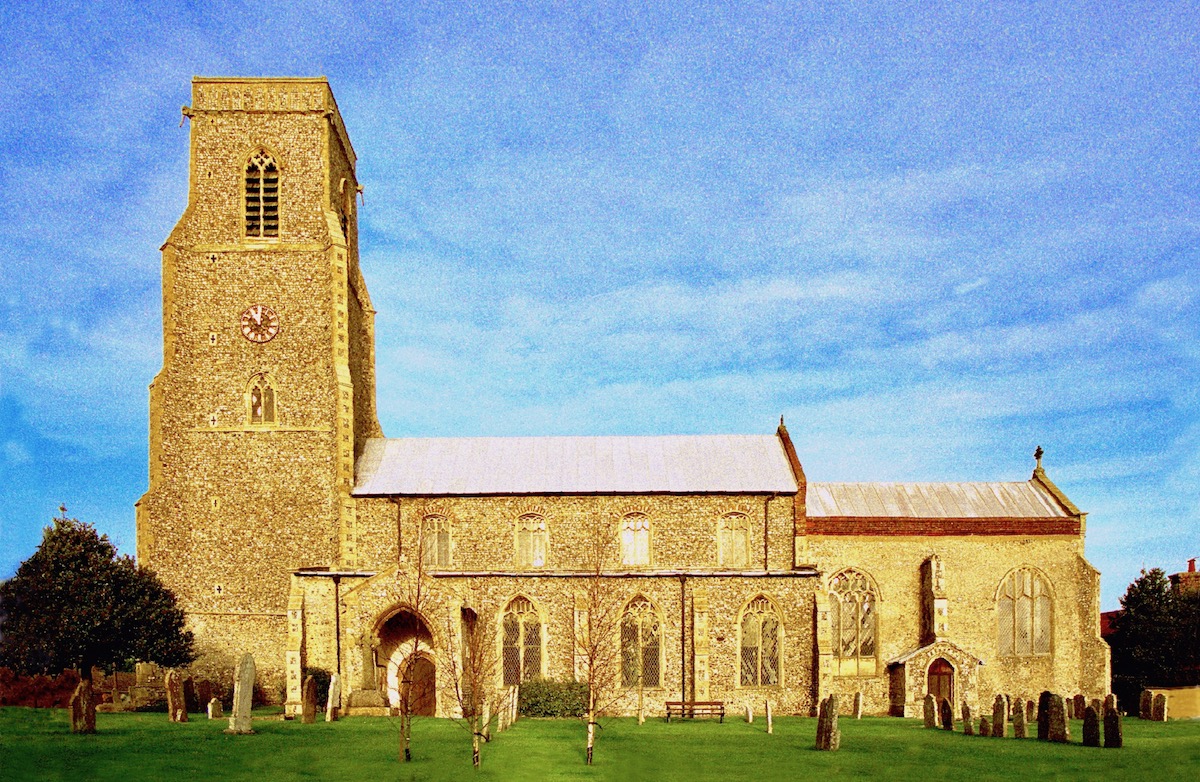 In the centre of Trunch, surrounded by a lovely collection of cottages and the more modern Crown Inn, is St Botolph’s church.  Much of what you see of the church is early 15th century, built upon earlier foundations  (see the new guidebook). The oldest part of the Church is probably the Chancel, which is early 14th Century with later additions.

St. Botolph’s Church Trunch is regarded as the most interesting of the village Churches of Norfolk  (‘The Guide to Norfolk Churches’ by D.P. Mortlock and C.V. Roberts).

A large variety of excellent musicians and ensembles have performed at St Botolph’s over the past few years. The medieval church offers an enchanting atmosphere and superb accoustics.

Lord Nelson’s daughter Horatia’s ledger stone is in the chancel and there are fine medieval misericords (mercy seats). Each carving is unique; some represent angels, and others are more grotesque in nature. In addition there are some beautifully carved bench ends. You can download the very interesting and detailed document “A history of the Chancel” which was written by the late Anne Horsefield in 2009 to satisfy a requirement of English Heritage before a repair grant could be givenl. 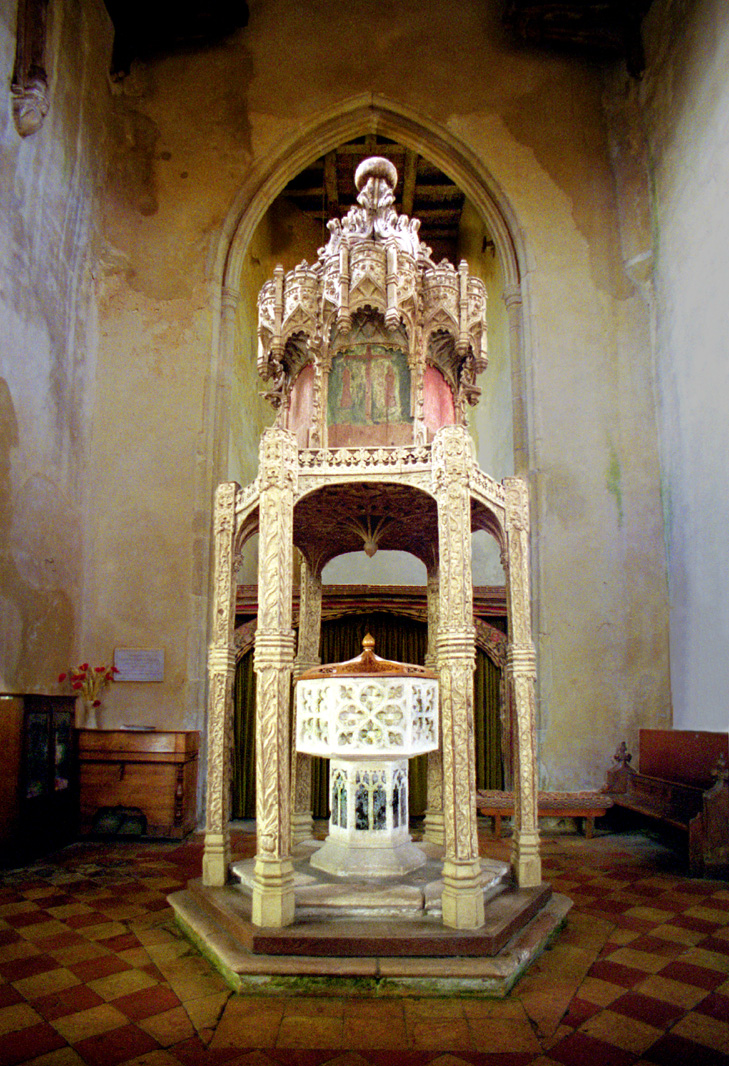 The very tall Nave has a fine hammerbeam roof. The great treasure of St Botolph’s however is the marvellous font canopy. Dating from c.1500, it is ornately carved in oak, and has slender pillars forming a hexagonal enclosure. It is one of only four to be found in England, the others being Durham Cathedral 1680, St. Peter Mancroft, Norwich 1450, and St. Mary’s, Luton 1350.

The font Canopy isn’t just one of only four in England, but arguably the best. It is so rare that people come from afar to see it, not necessarily because they are religious but because of its historical value and the mysterious symbolism of its many carvings, It is described as the jewel in the crown of this church. In addition to the front canopy, Trunch features a superb 15th century hammer beam roof, a feature of many churches in Norfolk and Suffolk.Here the carvings of angels are beautifully performed.

Along with the font canopy and roof the medieval screen survives. Like the canopy, this is richly ornamented. The twelve figures (11 disciples and St Paul) are boldly placed and coloured, but their faces have been completely vandalised by the 16th century reformers.

In the north aisle is the organ built by William Gray of London in 1808 and rebuit in 1957 by the Trunch organ builders Williamson and Hyatt. In 2012 this rare pipe organ was lovingly restored and rededicated by organ restorer Richard Bower, of Bower and Company, after a fund-raising appeal was launched to bring the organ back to life.

Mr Bower believed the organ originally was brought from Birmingham and it  is one of only three left in the country.

The latest Quinquennial Inspection of St Botolph has revealed that the roof of this beautiful Grade 1 Listed church needs £200,000 of restoration work. Trunch villagers have set up a fundraising campaign and website to save what has been described as a wonderful medieval church. Villagers have organised events of all kinds, fetes, Cream teas, raffles, auction of promises, and continue to host a varied programme of concerts in the church to please every taste from Jazz to popular to classical music. All concerts proceeds are donated to St. Botolph’s Church conservation and restoration projects.

St Botolph, to whom the church is dedicated, was a seventh century Anglo Saxon noble of the Benedictine Order who was among the most powerful christianising influences of his time.

“Botolph, Botulph or Botulf (d. c. 680) was an English abbot and saint. He is the patron saint of travellers and the various aspects of farming. His feast day is celebrated either on 17 June (in England) or 25 June (in Scotland), and his translation on 1 December” (source: Wikipedia). 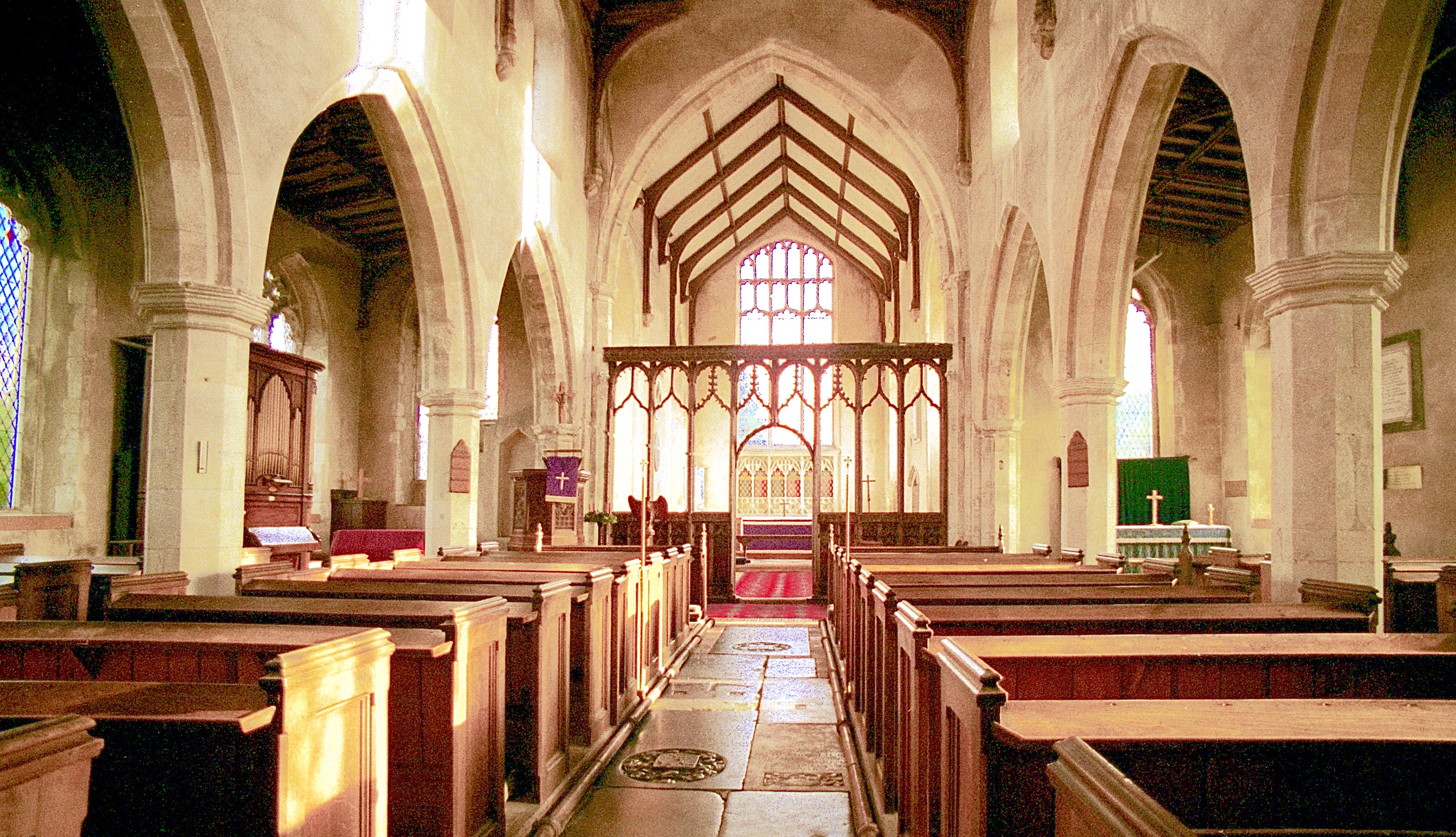