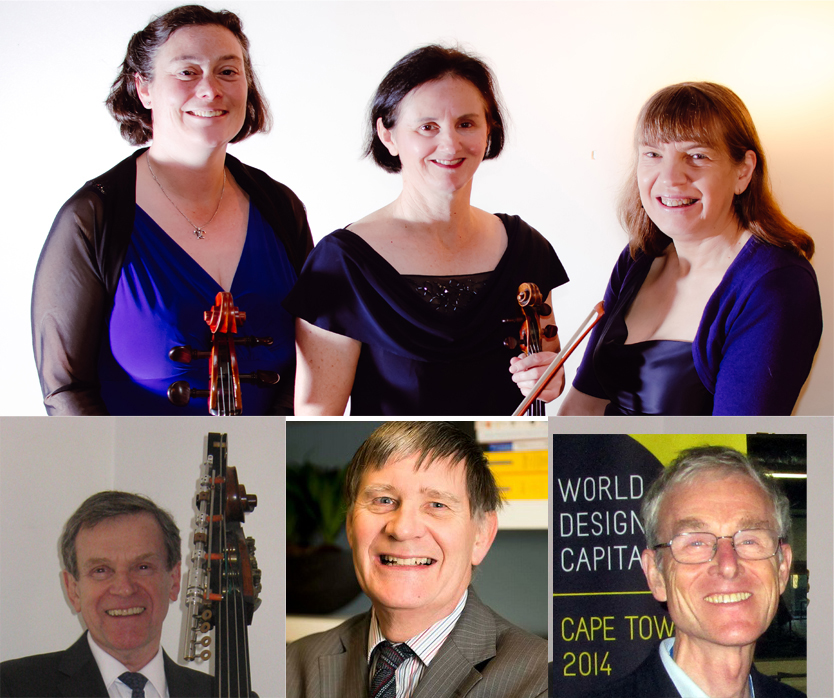 Anna Le Hair, who has delighted Trunch audiences on many occasions, returns with a fine ensemble to play two masterpieces embracing the tuneful folk music of Britain and Bohemia.

Frank Bridge was a contemporary of Vaughan Williams and a very fine, if all-too-seldom-performed composer. The young Benjamin Britten found him to be his most inspiring teacher and they shared a lifelong friendship. Bridge was 28 when he wrote this one-movement Phantasie Trio, which is full of wonderful melodies and rich and passionate Romantic exuberance.

Vaughan Williams was 31 when he wrote the piano Quintet. He had already written some of his famous songs, such as Linden lea and Silent Noon, and it is also full of exuberance and melody, as befits a composer who was still to write ‘The Lark ascending’, Britain’s favourite piece of classical music. This wonderful work is not as often performed as it should be, due to its unusual scoring.

Dvorak’s Piano Quintet is one of the finest pieces of Romantic chamber music, imbued with the spirit of the famous New World Symphony  and lively Czech folk music.

Some biographical notes about the performers appear below. Admission to the concert is by programme, £10 (£8 concessions). Programmes can be bought at the door from 40 minutes before the start of the concert. Proceeds are for the on-going restoration projects of St Botolph’s Church, a wonderful ambience for music-making.

Anna Le Hair (website click here) is a pianist and piano teacher based in Tring, Hertfordshire. Anna gained an honours degree in music at Edinburgh University where she studied piano with Colin Kingsley, and harmony with Kenneth Leighton. Her postgraduate studies were at the Royal College of Music, London, where her professors included Peter Element and Hubert Dawkes.
Since then, Anna has enjoyed a busy and varied career as a performer, teacher, accompanist, adjudicator, conductor and ABRSM examiner. She gives regular performances both as a soloist and with her regular duo partners, and also as a chamber musician, playing in many venues in Britain and abroad. Anna has performed at many festivals in Britain, most recently in Kings Lynn, and including the Edinburgh Fringe and Buxton, where she was nominated for the title of ‘Performer of the Fringe’. She has also recently played at festivals in Spain and Croatia.  In February 2014, she gave a recital tour in New Zealand with her duo partner, the violinist Arwen Newband. The Icknield Trio (Anna, Arwen and Sarah) opened the Piano Trio Society’s Festival in Notting Hill last year, and are performing this summer in the St Lawrence Jewry summer Festival in the City of London.

Arwen Newband (website click here) started to learn the violin at the age of 6. A New Zealander, she attended Auckland University where she studied with Mary O’Brien. She freelanced  with the Auckland Philharmonia  before gaining a scholarship which enabled her to study with Emanuel Hurwitz in London. She then embarked on a career which has included freelancing with various English orchestras as well as performing as a soloist and chamber musician.  She has performed concertos by Beethoven, Brahms, Dvorak, Khachaturian, Mozart, Bach and Vivaldi and has given many chamber music concerts, recently forming a duo with pianist Anna Le Hair, with whom she has recently returned from a Recital tour of New Zealand. She is also a committed teacher, enjoying bringing the challenges of music to children (and adults) of all ages and abilities.

Edmund Booth (2nd Vioilin) studies the effect of seismic waves on buildings, but ever since hearing, at the age of 6, a recording of the Bach E major violin concerto, the acoustic waves coming from a violin have been a consuming private passion.  The violin is a hard and demanding mistress, which he continues to study diligently; the reward is playing wonderful music like the Dvorak piano quintet.  Edmund is married to the pianist Anna Le Hair.